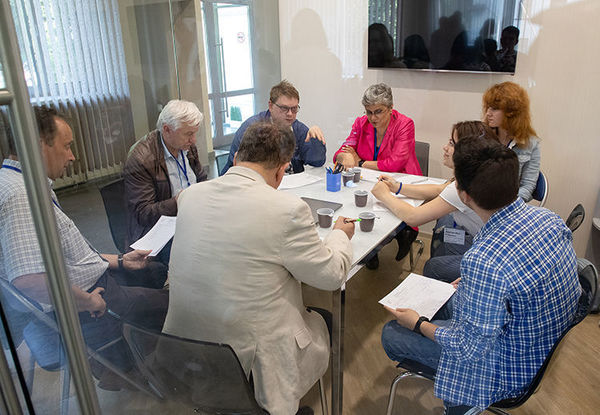 Freimann Professor Ani Aprahamian served as a juror at a regular regional stage of the international youth conference “Falling Walls Lab” that was held in the JINR Visit Centre, Dubna, Russia. The project was launched in Germany and was called in memory of the 20th anniversary of the fall of the Berlin Wall. Its aim is to provide international communication, an opportunity for the youth to present their ideas, scientific concepts, or to propose brand-new ways of solving problems in all spheres of human activities. A presentation should not exceed the time limit of three minutes and should consist of three slides. Winners of regional stages are given a chance to present their projects to the international jury in Berlin.

The Dubna stage of the conference was organized by JINR, the AYSS, and the University “Dubna”. Young JINR scientists, students and post-graduates of the Dubna University, universities and scientific centres of Moscow, Kazakhstan, Turkmenia took part in the conference. In particular, there were participants from MEPhI and the Bauman MSTU. The jury at this regional stage was represented by BLTP Leading Researcher David Blashke, Director of the Alikhanyan National Laboratory Ani Aprahamian, Head of the Academic Mobility Centre of the Dubna University Alena Voinova, JINR Vice-Director Richard Lednický, LIT Scientific Secretary Dmitry Podgainy, LRB Scientific Secretary Igor Koshlan, BLTP Researcher Alexandra Friesen, Chairman of the AYSS Council Alexander Verkheev.

Full story and more photos can be found here.