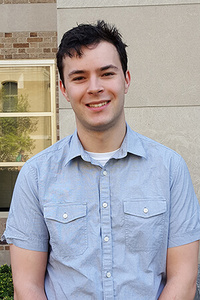 Physics graduate student Kevin Howard has been awarded a fellowship from the Japan Society for the Promotion of Science (JSPS). This summer Mr. Howard will be working with Prof. Shinsuke Ota at the Center for Nuclear Study at the University of Tokyo, and Dr. Tomohiro Uesaka, a Chief Scientist at the Spin Isospin Laboratory at the RIKEN Nishina Center for Accelerator-Based Science.

The RIKEN Nishina Center is home to the Radioactive Isotope Beam Factory (RIBF), which is used to study the properties of short-lived, unstable nuclei. In 2016, Mr. Howard and his experimental nuclear physics research advisor Prof. Umesh Garg, attended an experiment to study the properties of the isoscalar giant monopole resonance. Isoscalar giant monopole resonance is a collective and high frequency mode of nuclear oscillation, in the neutron-rich, radioactive, and doubly-magic nucleus tin-132. Such a measurement is very difficult and is of crucial importance in constraining the nuclear equation of state for asymmetric nuclear matter. The experiment was performed using an active target time-projection-chamber. During the fellowship Mr. Howard be working on analysis of that experiment as well as on design and optimization of another large-volume active target for future experiments on nuclei far from stability.