Rasmussen’s work uses spectroscopy, the means by which the elemental composition of stars is determined. This has been the driving force behind the majority of discoveries in the field of stellar nuclear astrophysics over the last century. The most difficult elements to obtain are the heavy products of the rapid neutron capture process (r-process) such as gold and platinum, as their absorption lines are weak and located at the blue, low-signal end of the optical spectrum. In this context, detections of uranium, the heaviest long-lived element, are the most difficult to achieve; only five such measurements currently exist in the literature. Rasmussen’s research reports the sixth: the smallest amount of the rarest element ever detected.

The addition of uranium to the collective abundance pattern of r-process elements of BD+17 3248 is crucial to the development of core-collapse supernovae and neutron star merger models which seek to explain the origins of those elements. In turn, these models inform those of galactic chemical evolution, presenting us with a clearer picture of the rise of chemical diversity observed in the Galaxy today. 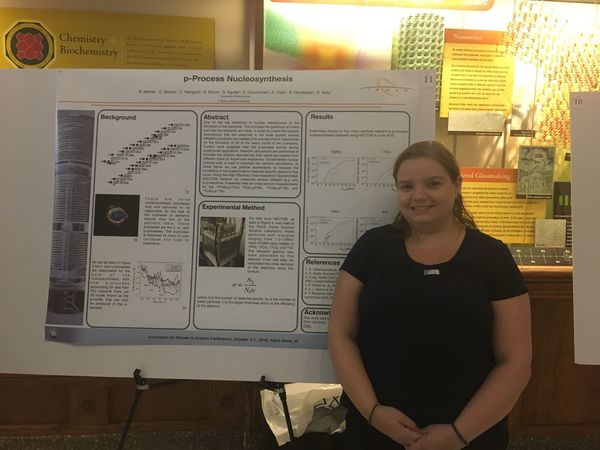 Kelmar’s work focuses on nuclear astrophysics and the formation of the elements, specifically focusing on p-process nucleosynthesis. Current work suggests that the p-process occurs during supernovae explosions. The p-process is responsible for the production 35 nuclei known as the p-nuclei. She works with the High Efficiency Total Absorption Spectrometer (HECTOR) detector in the Nuclear Science Laboratory (NSL) to measure cross sections for reactions relevant to the p-process. Her work focuses specifically on measuring (α,γ) cross sections relevant to the p-process.  The measured cross sections are used to constrain network calculations. Presented at the conference was her work on the 102Pd(α,γ)106Cd, 90Zr(α,γ)94Mo, 108Cd(α,γ)112Sn, and 110Cd(α,γ)114Sn cross sections.

The mission of AWIS-ND is to initiate, encourage, and engage women in STEM in a welcoming and supportive environment, creating a sense of belonging and providing opportunities for success.