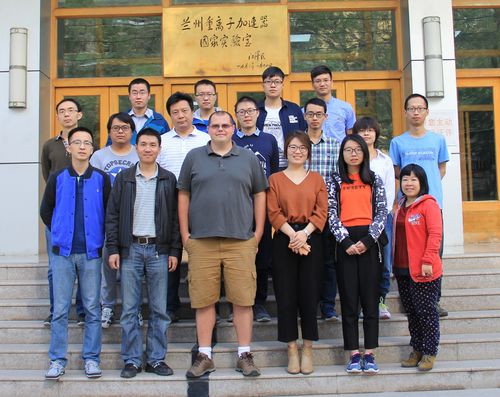 As part of continued support for the JINA R-matrix code AZURE2, a workshop was held at the Institute of Modern Physics (Chinese Academy of Sciences) in Lanzhou, China from September 18th to 22nd hosted by Prof. Xiaodong Tang.

Lectures and tutorials were given by Dr. James deBoer that emphasized the practical use of the code. An introductory lecture was given on theory with the remainder of the workshop centered on working through example reaction analyses that emphasized parts of phenomenological R-matrix that can be particularly challenging for beginners. 12C(n,n) was first analyzed to see the influence that subthreshold states can have on even scattering reactions. This also included looking at the role of background levels. The reactions 12C(p,p) and 12C(p,γ) were investigated to see an ideal example where the resonances observed in the data are well separated in energy from higher lying states so that no background states are needed. 16O(p,g) was used as to demonstrate a case where direct capture dominates the capture cross section and can be modeled well with only external capture. Reactions that populate the 7Be system were then investigated to see how a multi-entrance channel analysis is performed. Finally, the 16O system was quickly investigated using an input file available with the recent article in Reviews of Modern Physics 89, 035007 (2017). Uncertainty quantification was also discussed.