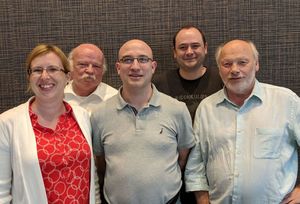 A team of faculty from the Nuclear Science Laboratory, Daniel Robertson, Manoel Couder, Anna Simon and Joachim Goerres, led by Michael Wiescher received 4-year support from the NSF to continue measurements at the underground accelerator facility investigating reactions important for the stellar nucleosynthesis processes. The Compact Accelerator System for Performing Astrophysical Research (CASPAR), undertakes National Science Foundation (NSF) funded research at the underground accelerator laboratory housed in the Sanford Underground Research Facility (SURF), located in the Black Hills of South Dakota. CASPAR resides 4850 ft underground and is dedicated to the study of nuclear reactions fueling stellar environments and elemental production. CASPAR is the only deep underground accelerator laboratory in the U.S. The 1-MV accelerator provides high-intensity beams required for measurements of the very low cross sections that drive the life of stars during their burning stages and define the final fate of the star.

The measurements funded within the award will focus on alpha induced reactions important for the understanding of nucleosynthesis in first stars, whose signatures are observed in the spectroscopy observations of extreme carbon-enhanced metal-poor (CEMP) stars.  The experiments are also crucial for the understanding of the s-process nucleosynthesis in Red Giant Branch (RGB) and Asymptotic Giant Branch (AGB) stars with observables ranging from the spectroscopy of planetary nebulae to cosmo-chemistry analysis of meteoritic inclusions.  It will provide an improved understanding of the s-process which, next to the r-process, is the main path towards the production of elements with masses above iron.