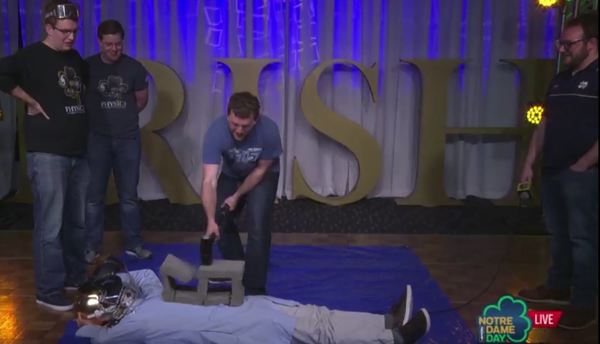 Three graduate students (Adam Clark, Austin Nelson, and Craig Reingold) of ISNAP participated in this year’s Notre Dame Day live broadcast on April 23rd to gain votes for the Graduate Physics Society (GPS). During the broadcast, the students of the GPS performed a physics demo in which they used a sledgehammer to smash a cinder block on the chest of the broadcast host and Notre Dame alumni Vic Lombardi. This is a classic physics demonstration that illustrates the concepts pressure, inertia, and the conservation of energy.

At the conclusion of Notre Dame Day, the organization earned 231 votes which was more than double the amount earned the previous year. This corresponds to a $2.37 K value which will be used to fund graduate student events and organizations within the Physics Department. Click here to see the demo on Youtube.

In the picture the students from left to right are Allan Leishman (Condensed Matter), Adam Clark, Austin Nelson, and Craig Reingold (Institute for Structure and Nuclear Astro Physics).