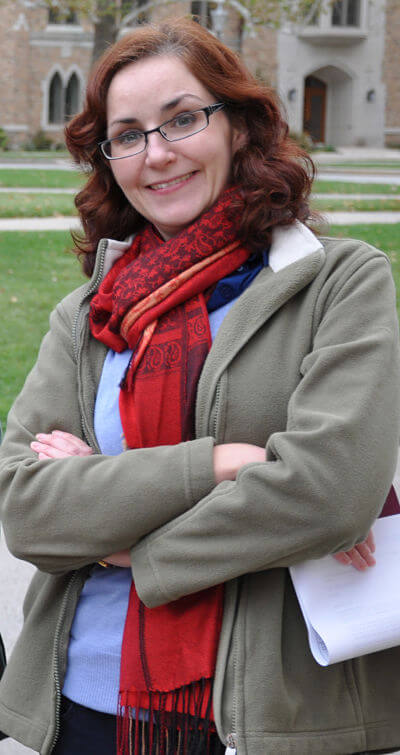 Mary Beard (1980-2016) came in 2002 as an MPhys student from the University of Surrey to the nuclear physics group at the University of Notre Dame, she has not left us. Her MPhys Master degree was on the topic of pycnonuclear reactions in the deep crust of neutron stars. Despite her love for England and her desire to live and work there, she came to Notre Dame for a PhD, not without branching out first for an excursion to the favelas of Sao Paulo to learn about nuclear potentials from Brazilian reaction theorists. This excursion provided her with an unlimited source of entertaining stories from Brazil. During her PhD she worked with Dima Yakovlev of St. Petersburg, Russia and his student Peter, which complemented her repertoire of stories from the southern hemisphere with a new set of entertaining tales from the cold most northern part of Europe.

Mary was a sharp observer of the human condition with amazing incites, enormous patience and nearly infinite tolerance for everyone. She was understanding and full of compassion for people, their strengths as well as their weaknesses. For her PhD project she calculated a large set of pycnonuclear fusion and neutron capture reaction rates and their impact on the ashes of X-ray bursts in neutron star crusts. After her PhD, she held postdoctoral positions with the ExtreMe Matter Institute EMMI at GSI Darmstadt working closely with research groups in Rossendorf and the University of Basel on a number of projects before she returned as a Research Professor to Notre Dame. Mary built a broad international network of collaborations. She was liked by all of them for her wit and humor, as well as her highly sought after scientific expertise. She kept up her scientific work and enthusiasm through the very end, she never despaired, optimistic to leap frog from one type of treatment to another until a cure could be found. She remained full of hope until the very end. Through all these years Mary became the spirit and strength of the nuclear group, she mentored graduate and undergraduate students alike, she was a source of support and ideas for faculty and a friend to all. We miss her and we will keep missing her, but we will never forget her.