Some explosions in the Milky Way and throughout the Universe are so violent that they have been observed with small telescopes and even with the naked eye for hundreds of years. They were called Novae, the Latin word for “New” since originally it was thought that these very new stars. In 1981 Wallace and Woosley et al discovered that these were in reality explosions on the surface of close binary star systems, where the main star, a white dwarf, accumulated hydrogen from a companion red giant. They explained that at high temperatures (100 Million Kelvin  or higher) and at high densities (10 kg/cm3 or higher) and favorable initial conditions, a sequence of nuclear reactions can occur that produces the enormous energy that we observe as Novae. These reactions start as break-out reactions from the hot CNO cycle, followed by a long and rapid sequence of radiative proton-capture reactions (p,γ) on proton-rich unstable target nuclei and  subsequent β-decay. This process is call the rp-process.

After the deployment of γ-ray detectors in satellites above our atmosphere that absorbs all γ-rays it was it was discovered that the rp-process can also take place at even higher temperatures and densities if the main star in a close binary system is a neutron star instead of a white dwarf. These explosions are called X-ray bursts. Conditions for the rp-process to happen can also exist in other locations like in certain regions of super novae, not discussed in this short introduction.

Many details of the rp-process are not well understood and, therefore, the determination of the (p,γ) reactions rates has been an important activity of nuclear astrophysicists. Unfortunately direct measurements of this reaction are not possible, because the targets are short-lived Radio Isotopes (RI). Therefore, these rates are measured in inverse kinematics, where the RI is the projectile and the proton as hydrogen gas is used as target. This technique was used in the past 25 years to study a few rp-process reactions, but was severely limited because only relatively low intensity RI beams were available.

This is changing with the construction of FRIB, the high intensity RI beam facility of MSU. Therefore, a collaboration of astrophysicists have been collaborating to design the SECAR, a Separator for Capture Reactions, that will use FRIB’s high-intensity RI beams to study systematically rp-process reactions up to masses A bout 65. The construction of SECAR has started and will become operational by 2021 in time to make use of the first RI beam from FRIB.

SECAR is designed on the basis of the experience obtained in the pioneering  recoil separators built and used previously, e.g. DRAGON. The figure show shows SECAR at the NSCL reaccelerated beam line ReA3 with RI beams in the center of mass energy range from about 0.2 MeV to 3.0 MeV. SECAR starts with the high density gas-jet target JENSA followed by 4 Sections with 4 focal planes F1 – F4. In Section 1 a single charge state is selected.  Since the magnetic rigidity of the beam and the recoils are almost the same a velocity filter is used in Section 2 to separate the beam and the recoils in FP2. In order to achieve the required high mass resolution of m/dm = 750 a second velocity filter is installed in Section 3. The expected beam rejection is about 10-13. The final Section 4 provides a clean and flexible ion-optics  for the detector system, that will allow discriminating the beam with an additional rejection of 10-4 by means of time-of-flight, energy loss and residual energy measurements. 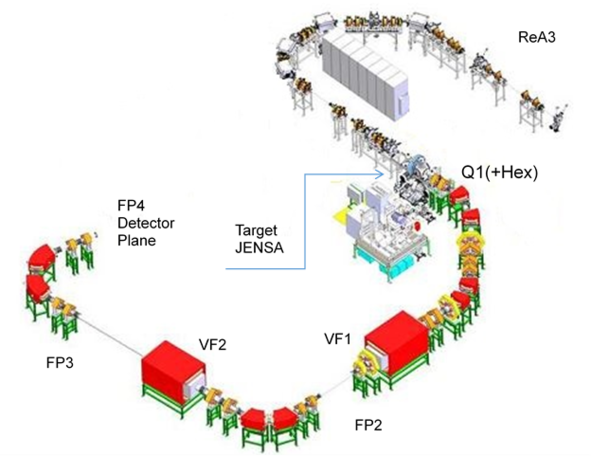