Thanks to extensive experimental efforts that led to a precise determination of the various superallowed 0+ -> 0+ pure Fermi transition experimental quantities, we now have a very precise value for Vud that leads to a stringent test of the CKM matrix unitarity. Despite this achievement, measurements in other less precise systems remain relevant as conflicting results could uncover unknown systematic effects or even new physics. One such system is the superallowed mixed transition, which can help refine the same theoretical corrections used for pure Fermi transitions and hence improve the accuracy of Vud. However, a corrected Ft-value determination from these systems requires the more challenging determination of the Fermi Gamow-Teller mixing ratio r. Nevertheless, ρ is currently known for five mirror transitions and there are plans to measure it in more systems. Hence, in anticipation for these future measurements, it is imperative to improve the quality of the existing experimental data, which includes atomic masses, branching ratios, and half-lives.

To this end, we have developed at the University of Notre Dame a beta-decay counting station to perform high-precision half-life measurements. This station is located after the TwinSol facility, which allows for the use of relatively purer radioactive ion beams as compared to other past and present facilities. Also, the less stringent schedule of the Nuclear Science Lab allows for the performance of precision measurements on longer-lived nuclei (e.g. 11C with a 20 minutes half-life) and also facilitates a faster turn around time for experiments.

The beta counting station consists of four rotatable arms that hold targets where beam can be implanted and then subsequently moved in front of a detector comprised of a 1 mm thick plastic scintillator coupled to a light guide cemented to a photomultiplier tube. One of the arms holds a high-purity gold foil surrounded by a tantalum frame that is mainly used for implantation. In the event that a backup implantation is needed, a second tantalum paddle can be used. 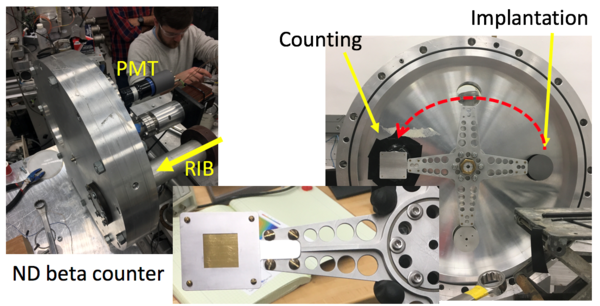