Low energy nuclear physics experiments with radioactive nuclei often require pure ion beams free of isobaric contamination. Typical magnetic separators, with resolving powers of R < 5000, can easily separate species by mass number but lack the resolving power to remove isobaric contaminants. Multi-reflection time-of-flight mass spectrographs (MR-TOF-MS) have become a popular choice to purify radioactive ion beams (RIB), with devices installed or under construction at several RIB facilities. A MR-TOF traps ions between two electrostatic mirrors, folding the flight path into an extremely compact device, while achieving resolving powers on the order of 105. In addition to a small physical footprint, the MR-TOF is relatively simple and inexpensive to construct. With typical ion flight times of less than 10 ms, the method is compatible with short half-life and low-yield nuclei, which are of great interest at RIB facilities. The MR-TOF can also fill the role of a mass spectrograph, permitting mass measurements on short-lived nuclei with precisions comparable to those obtained using Penning traps.

A MR-TOF has been constructed and being commissioned off-line at the University of Notre Dame Nuclear Science Lab. The off-line test setup comprises a thermo-ionic source producing alkali ions (23Na+, 39,41K+, 85,87Rb+, 133Cs+) that are accelerated to 3.5 keV. After the ion source, a Bradbury-Neilson gate (BNG) is used to create 160 ns bunches from the continuous ion beam. While initial simulations have indicated that such bunching method would produce sufficiently low-energy spread bunches for the MR-ToF, the off-line commissioning has revealed that the sideway deflection of the ions by the BNG results in bunches with a large radial emittance that limits both the achievable resolving power and efficiency of the device. Nevertheless, a relative mass resolution of 45,000 after about 10 ms has been achieved. The Notre Dame MR-ToF will ultimately be used to remove isobaric contaminant produced at the N = 126 factory of Argonne National Laboratory. 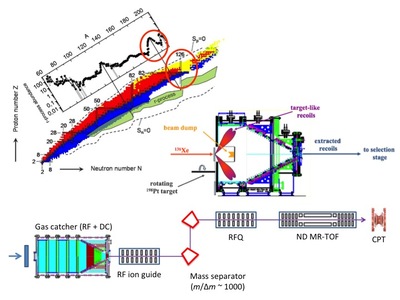 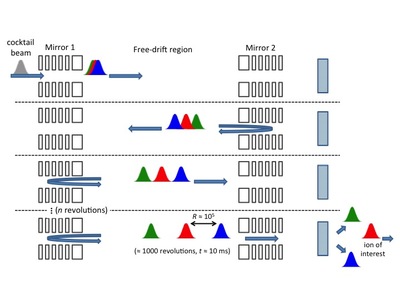