GEORGINA is a compact Ge-detector array consisting of 5 detectors each with a relative γ-efficiency of 100%. The design criteria of this array were: 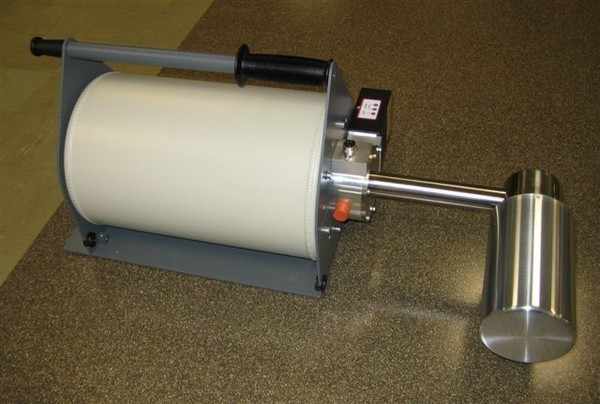 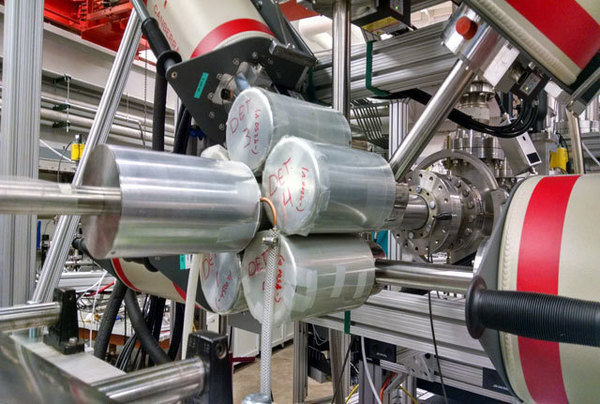 Placing the centers of the crystals on the corners of a regular pentagon (as shown in the picture) leaves an opening large enough to accommodate a standard 2” beam line. This allows placing the array just upstream of a target in which the nuclear reaction takes place. In this way, it is possible to cover most of the upstream solid angle with Ge-crystals resulting in a large γ-efficiency, often a prerequisite for the measurements of low reaction cross sections. A typical set-up is shown in the picture to the left where one of the detectors has been removed for clarity.

In many low-energy reactions with beam energies below 2-3 MeV the beam is stopped in the target itself and an additional large volume Ge-detector can be placed just downstream of the target which approximately doubles the γ-efficiency. Because of its modularity GEORGINA can also be used to measure γ-γ coincidences between members of a cascade. In a recent experiment one such cascade was observed which consisted of a 4.4 MeV γ-ray in coincidence with a 4.9 MeV γ-ray. Setting a coincidence gate on the 4.9 MeV line observed in GEORGINA resulted in a γ-spectrum in the downstream detector shown below (note: x-scale in channel number with a dispersion of 2 keV/ch):

This spectrum is background free and represents the response function of a Ge-detector to 4.4 MeV γ-rays. Using this method and selecting appropriate cascades, it is possible to experimentally determine absolute full-energy as well as total detector efficiencies up to energies in excess of 10 MeV without the need of calibrated sources and summing corrections. Because of the good performance of the GEORGINA detectors, they can also be used individually; for example detectors have been recently used in combination with RHINO and ICEBALL.